Sharon Osbourne isn’t racist but she is ‘Unfiltered’

Whatever you may think or believe, Sharon Osbourne is not racist. Sure she’s brash, over-confident and opinionated. But she is also loyal, nurturing and a good friend. Just ask Cyndi Lauper, who stated, “I have known her for a long time and I do not believe that she is racist“. Whilst Lauper goes on to state, “Sharon is sincere in her desire to apologize and change“, we don’t believe she should. Because she did nothing wrong. The only ‘mistake’ Osbourne made was being too emotional, when she should have been calm.

What is Cancel Culture?

A well-know Youtuber with a Ph.D believes that ‘cancel culture’ is like a ‘conspiracy theory’. He likens it to ‘seeing racism everywhere’. Well, it’s not. His diagnosis is a bit skewed but he continues to make money on Youtube.

Cancel Culture is the act of removing someone from a prominent position. Such as a television presenter who doesn’t fit the culture, group or tribe. It has nothing to do with performance or ‘racism’. It has to do with ideology. Being fired and being ‘cancelled’ are not the same things. Being cancelled is similar to being ‘excommunicated’ or ostracised. When you are fired it means losing a job, not social standing. Cancelling someone is a big deal. It’s mostly mob driven.

As Lisa Ling pointed out, “I’m not a fan of cancel culture“. She also stated that Sharon Osbourne had been good to her. Ling believes that everyone should be given a second chance. But she too prescribed to the apology route, whereas we don’t. Ling never mentioned being called “Wonton” or “slanty eyes” by Osbourne. Interesting since this is what Osbourne is accused to saying to Julie Chen, who has yet to confirm or deny the rumours. Currently it is rumour and conjecture as it hasn’t been proven. 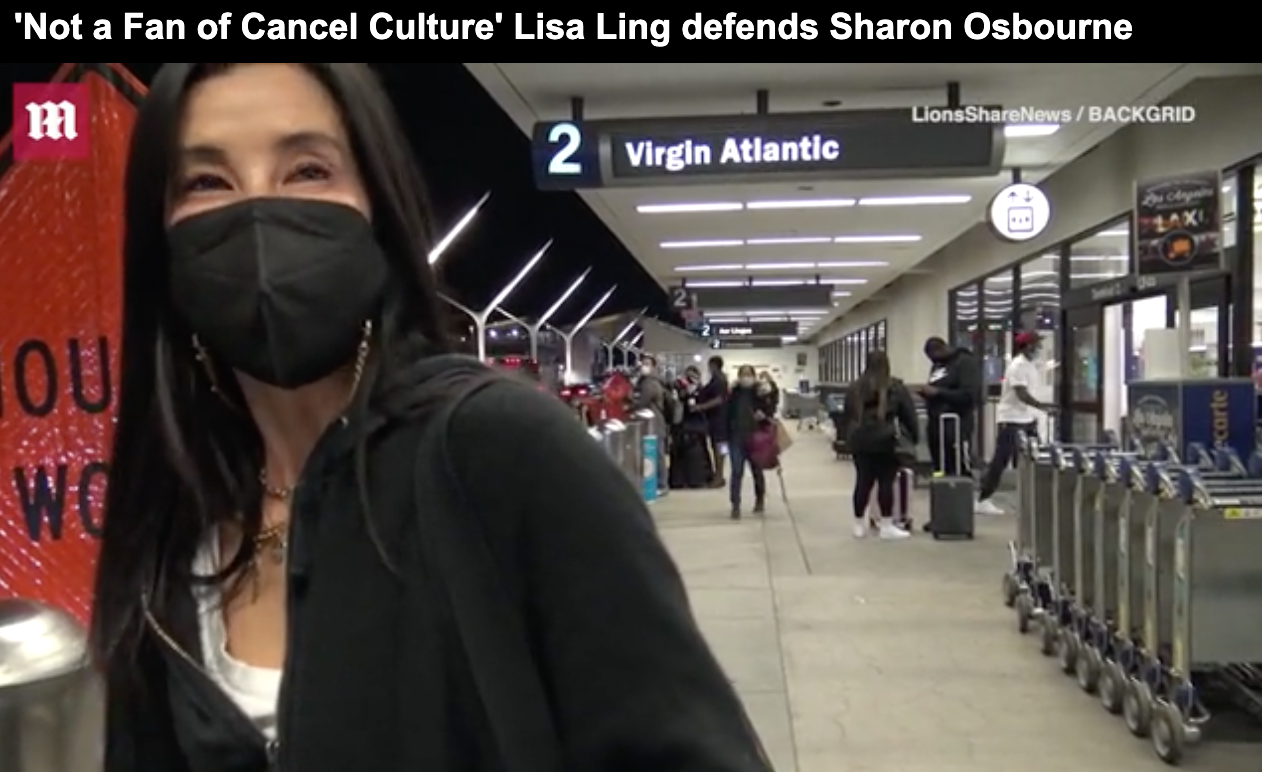 Why Sheryl Underwood should apologise

Sheryl Underwood’s diatribe about Piers Morgan was the mistake. Underwood pointed a finger of racism at Morgan without providing any proof. When she was confronted by Osbourne, she said that it ‘wasn’t what Morgan said’. It was the implication and reaction to it. So, Morgan dared to criticise a woman who ‘ticked the white box‘ in Hollywood because in Underwood’s opinion she was black?

Underwood resurrected the Jim Crow “one-drop” rule to defend Meghan Markle. In other words, how dare Morgan criticise a “black woman”. Osbourne was correct when she stated, “She ain’t black”. Because by Markle’s own “self-definition” she isn’t black, but “bi-racial”. This didn’t matter to Underwood because even Markle’s 25% blackness was black enough for Underwood to put her in the “black” category.

The problem with race baiters like Sheryl Underwood (The Talk) is that their central argument has nothing to do with race at all. It has to do with criticism. She can open up her gob and criticise whomever she wants, but God forbid if you dare to criticise anyone ‘black’, even if they are 75% white like Meghan Markle. “White-bread” Markle never cared about black people, until it suited her to play the ‘race card’ for sympathy. Jussie Smollett???

But wait a minute! Didn’t Sheryl Underwood defend George Lopez? Yes she did in 2017. 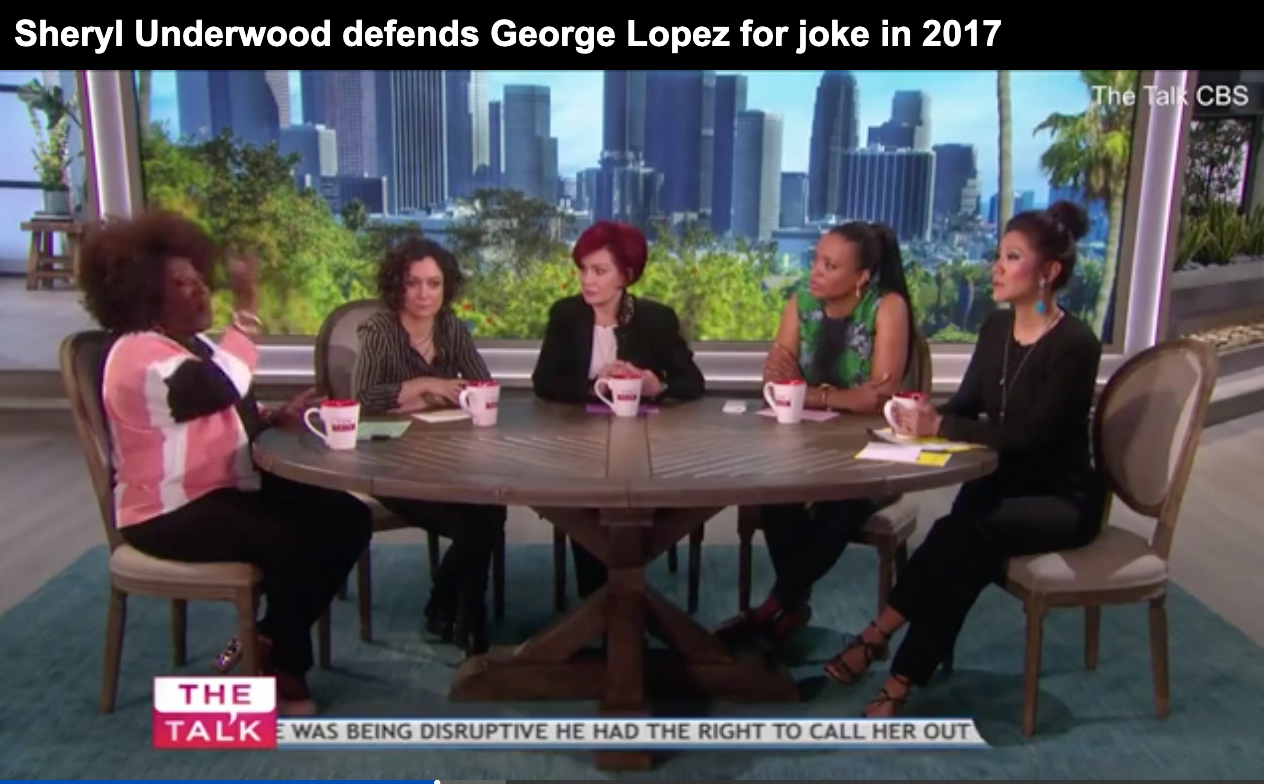 Sharon Osbourne isn’t racist but where are the stories originating from?

When researching links, the only common denominator we could find was Yashar Ali. He was quoted in People, Huffington Post to Daily Mail and others. And you know how the media likes to regurgitate the same stories. We couldn’t find anything about him on his website. His Twitter profile lists him as a New York Magazine and HuffPost Contributor. He manages a subscription based newsletter.

As is our policy, we prefer to go to the original story. So we followed the links and drilled down until we got to the source. The “bread crumbs led us to Yashar Ali. His writing style is thoughtful, but just like Meghan Markle’s Oprah chat, provides no ”receipts” or evidence that prove Osbourne is a racist. He does prove she is overtly confident and unfiltered. But just because she says what’s on her mind, doesn’t prove she is a racist. Just because she points out the obvious doesn’t prove she is a racist. It’s also difficult to prove someone said something, without video or audio, otherwise, it’s hearsay.

This is the FIRST email Robinson Peete sent Osbourne. It should be noted that Sharon Osbourne posted this on her Twitter and not Robinson Peete.

Robinson Peete’s story is full of holes yet, Yashar doesn’t ask for receipts? There are NO receipts that Osbourne called Robinson Peete ‘ghetto’. The only video is the one we posted to this report. Matter in fact, Osbourne didn’t even call Leah Remini ‘ghetto’ either. So, it would make sense that Osbourne wouldn’t recollect calling anyone ‘ghetto’ because she didn’t.

Yashar states that he spoke with eleven sources, but only Leah Remini went on record. Yashar explains why. “This story is based on conversations with 11 sources who spoke to me in 2018 and again in recent days about remarks Osbourne has made over the years. Almost all of the sources declined to speak on the record because they fear career retribution, signed a nondisclosure or non-disparagement agreement, or aren’t authorized to speak to the press by their current employers“.

By including only Remini’s account, without naming the other “sources” Yashar had biased his report from the start. You need at least two corroborated stories. Three would be better. That are unrelated, meaning, no spousal or BFFs. By all account, Remini and Robinson Peete are BFFs. Yashar never revealed in what capacity, status or employment were these sources. To be honest, “unnamed” sources lend ZERO creditability to a report. It’s just lazy, sloppy journalism and reporting.

For instance in our report, Meghan Markle ignored racism at Immaculate Heart High, we provided several receipts. We also showed evidence that her speech was a lie as reported by the sycophant media. Factually, Markle never addressed the graduating class. Her speech was only posted to Essence for media distribution only.

Any investigative reporting must include receipts. The kind that Sharon Osbourne showed Daily Mail. “Sharon Osbourne has refuted former The Talk co-host Sheryl Underwood’s claim that she never apologized after their on-air row by revealing exclusive screenshots of her text messages to DailyMail.com“. Underwood stated she never received anything from Osbourne. But once again, it was Osbourne who provided the ‘receipts’ to prove Underwood didn’t tell the truth. Only after Underwood was confronted that there were texted “receipts’, she changed her story.

She ain’t black is correct because Meghan Markle isn’t

Once again, Yashar is picking at straws. Sharon Osbourne is correct, Meghan Markle ain’t black. Besides not looking black, she never claimed to be black. We agree with Eve when she stated that Black people come in all different colours. But Markle has always claimed to be bi-racial. She recognised both her dad and mum. Markle also ticked “white” in Hollywood and has never played a “black” part. She joined a white sorority when there was a black sorority option at Northwestern.

Yashar may be looking for racial stories everywhere, but we report on ‘integrity matters’. If you think Markle’s ‘black themed’ wedding was her embracing the black culture, think again. It wasn’t even her idea. It was a gift from HRH The Duke of Cornwall.

Justin Bieber admits he was influenced by black culture

Yashar continues to trash Sharon Osbourne by calling her “bigoted”. He cites Justin Bieber. “She has also made bigoted comments about the Black people, including remarks to The Daily Beast about the time Justin Bieber was caught on camera urinating in a bucket: “I think he doesn’t realize he’s white and not Black,” she said. “That’s a huge problem.”

The article continued, “In 2016, he was hit with backlash after wearing his hair in cornrows and, later, in dreadlocks, both traditionally seen as Black hairstyles. Two years before that, he issued an apology after TMZ uncovered video footage of him using the N-word while telling a joke to friends when he was 15″.

In other words, Justin Bieber appropriated the black culture. Was Osbourne wrong to point this out? No. She was correct, yet once again Yashar tried to spin this to make her into a bigot.

Yashar perpetuates the storyline that Sharone Osbourne got Leah Remini and Robinson Peete fired. He alludes to a Howard Stern interview in December 2011. He doesn’t provide a link. During our research, we didn’t find the interview segment but two articles. Huffington Post dated 14th March 2012 provided a link to Eonline dated 13th December 2011.

The heading for Huffington Post alluded to Remini as fired for being ‘ghetto’ but no mention of ‘ghetto’ in the Eonline ‘transcript’ of Osbourne’s response to Howard Stern. Unless there is verbiage or transcript of Osbourne actually saying they ‘were’ ghetto, then this argument is all conjecture and becomes a she said, she said account. It’s like Meghan Markle claiming she had receipts and then not producing it.

Yashar continues,‘according to Remini, in one exchange during the first season’, Osbourne said of Chen: “I mean, who the fuck does slanty eyes think she is? She shouldn’t be pillow-talking with our boss.” Yashar should realise that putting direct quotation marks is specific. It means the exact phrase spoken by a person. The use of an “air quote” encapsulate a phrase. Can Remini remember Osbourne’s exact quote almost 10 years later? Does she have video or audio she could provide as receipt(s)?

Again, Yashar writes ‘according to Remini’, Osbourne said of Gilbert: “Why won’t the pussy licker do anything about the wonton?” and “Why won’t the fish eater be part of this discussion? She’s the fucking executive producer.” Again, these are in direct quotation marks. Unless Remini is gifted to recall exact conversations, it is not possible that she would be able to exactly recall what Osbourne said at the time.

Yashar does end on a strong note and makes some good observations. Sharon Osbourne should have handled adversity far better than she had. This included the situation with Renee Tab. If Osbourne didn’t want guests of guests to enter the raffle drawing, she should have set the ground rule at the start. Instead it turned into a ‘media circus’. Tab and Osbourne may have two different recollections of the same event. Whether Osbourne used a racial slur is not provable. Again, it is a she said, she said. Unless Tab has video, audio or written remarks by Osbourne, it’s hearsay.

Frankly, if a host asks that a bauble be returned because they intended an actual invited guest to win, why keep it? It is our policy never to receive gifts from clients. We also don’t participate in our own events. This eliminates conflict of interest. Whilst we treat everyone as an invited guest, regardless, guests should always take the lead from the host.

In conclusion, Sharon Osbourne isn’t racist but she is unfiltered. Whilst free speech should be respected, her kind of ‘brashness’ just doesn’t work in today’s politically correct world, especially on ‘liberal’ media. Given the fact that CBS paid Oprah Winfrey and Harpo Productions $7M for the Meghan Markle chat, there was no way they would allow Osbourne to keep her job, under the circumstances. CBS reps can deny Osbourne wasn’t paid out, but knowing entertainment contacts, there is an exit or termination clause, so CBS had to pay off Osbourne’s remaining contract, which could be in the millions.